0
was successfully added to your cart.

Like so many of us, my wargaming interests date back to my youth.  I believe the first time I painted a figure was sometime around the age of 7 when I attempted to paint some of those old 1/72 – 1/76 soft plastic sets of figures one could find at your local hobby shop.

As I grew older, my interests and lists of friends also grew.  I remember being introduced to the old D&D Battle System set with tons of counters and when I was shown my first Games Workshop figure.  The rest of my youth was spent exploring the hobby through Games Workshop with the occasional foray into historicals.  Equally difficult to finding historical gamers at that time was trying to convince people my age to get into historical gaming instead of focusing on those alluring GW figures and game systems.  I gamed GW with friends and read Miniature Wargames Magazines when I was alone.  Painting and gaming for me was a great way to stay out of trouble as a kid.   However, it was also a great way to get into trouble as the time we used real smoke bombs and homemade flares, in my parents’ basement, for an Epic Space Marine night battle.  Seemed like a good idea at the time…  On the painting side of things I managed to win a few very minor contests at very small game store conventions.

Following the great emancipation at 18 I went on to join the USMC and afterwards attend college.  I went on to work in many different areas including being a high school football and basketball coach.  This period of time, until I married and settled down, can easily be called my “miniature wargaming dark age”.  Aside from the odd GW model, ACW figure, or the occasional computer game like Hearts of Iron there isn’t much in the gaming realm to mark this period. 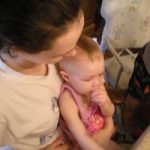 I‘m sure we all had times in our youth when we’d daydream about the collections we’d have and all the games we’d play by the time we’re 30 or so.  A fact that would upset my young self is that I didn’t start collecting again until after I was 30 and while starting a family with my wife, Nicole.  This personal “wargaming renaissance” has been great and the best part is that its not yet reached the heights at which I hope to see it.  Granted, its not easy to find games in my geographic location, but the wife and kids have been able bodied generals along the way.

Do you have miniatures you need painted? Lets talk about it!